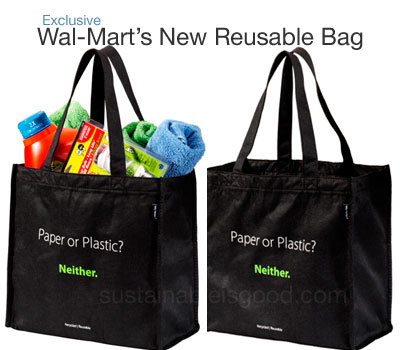 Wal-Mart CEO Lee Scott announced last week his company was introducing their own reusable shopping bag.  The announcement came at a sustainability summit held near Wal-Mart’s headquarters in Bentonville, Ark.

The new Wal-Mart shopping bags are made from a fabric containing rPET.  The bags are made from 85% recycled content and hold more than twice the amount of an average plastic bag.  The bags will sell for $1 and be located near checkout aisles in Wal-Mart stores.  Wal-Mart will also take the bags back at the end of their life-span for recycling.

The bags are black in color and feature the slogan “Paper or Plastic? Neither.”

The new bags will appear first on the West Coast this weekend and roll eastward across the country throughout the month of October.