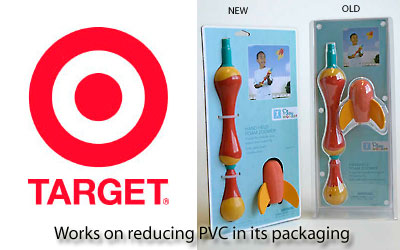 Minneapolis-based Target has used its size and buying power as a way to get suppliers to reduce unnecessary packaging.

The retailer targeted suppliers using the often tough to open “clamshell” style packaging asking them to switch to greener options.

According to the Minneapolis Star Tribune, earlier this year Target asked its packaging vendor for Ipod carrying cases to replace its clamshell packaging with a recyclable cardboard package with a small plastic window. The change in packaging will prevent an estimated 5,000 pounds of PVC from ending up in landfills.

About 18 months ago, Target pushed its seven private-label packaging companies to get rid of excess wraps. The result: Packages for more than 500 items, from dog leashes to toy rocket launchers, have been redesigned to be less harmful to the environment. In about 100 instances, PVC plastic was eliminated from private-label packages.

Target’s biggest competitor Wal-Mart is taking similar steps.  The retail giant has pledged to eliminate all private-label PVC packaging by 2009. The company also has set a goal of producing “zero waste” by 2025; which means that, through recycling and packaging reduction, Wal-Mart will eliminate all waste flowing through its stores and offices.