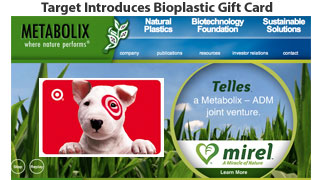 Target stores have introduced a new gift card made from a bioplastic called Mirel.  The gift card is biodegradable and made from natural sources.

The new biobased gift cards are available at 129 Target stores across the country.

Mirel is a new family of biobased plastics made from corn that provides an alternative to traditional, petroleum-based plastics. Unlike conventional plastics, Mirel biodegrades in a variety of environments including soil, home compost, wetlands, rivers and oceans.

The biobased plastic is made by Telles, a company formed between Cambridge Massachusetts, Metabolix and Archer Daniels Midland (ADM).  Telles is a 50-50 joint venture between the two companies.

Telles is currently working with more than 50 prospects on more than 70 applications, including consumer products, packaging, single-use disposables, and products used in agriculture and erosion control.