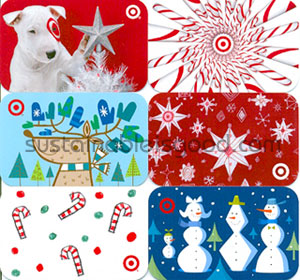 Target stores are carrying bioplastic gift cards in all 1600 stores for the holiday season.  The cards, available in twelve different holiday designs (see photos) are made from Mirel, a biobased plastic from Cambridge Massachusetts-based Metabolix.

According to a source, the cards began to appear nationwide on Saturday 12/1 in Target stores.  Metabolix confirmed the news late Monday with a press release.

Sustainable is Good has reported extensively on the Mirel gift cards and the Target relationship.  In July, Target test marketed gift cards made using Mirel in 129 of its stores. 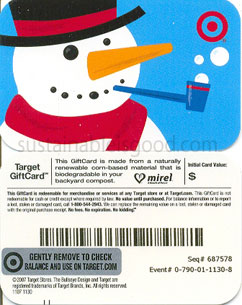 Mirel is a family of biobased, sustainable and biodegradable plastics that provides an alternative to traditional, petroleum-based plastics.  Mirel also biodegrades in a wide range of environments including soil, home compost, wetlands, rivers and oceans unlike traditional persistent plastics.

Metabolix and Archer Daniels Midland Company (ADM) are commercializing Mirel through a joint venture called Telles. Telles is a 50-50 joint venture between the two companies.

The first commercial scale Mirel production plant is being constructed adjacent to ADM’s wet corn mill in Clinton, Iowa. The plant is expected to begin operations in late 2008 and is designed to produce up to 110 million pounds of Mirel annually.

In October a new web site was launched for Mirel plastics.