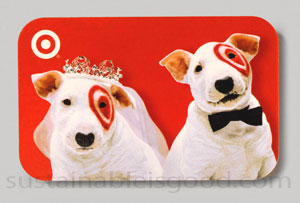 UPDATED 12/4 – See our latest story on Mirel and Target – all 1600 stores will carry the gift cards for the holiday season – Read full story.

Back in August Sustainable is Good reported on new gift cards Target was selling made from a biodegradable plastic called Mirel.  At the time we ran the original story, shortly after the cards were announced, we didn’t have any photos of the actual cards. 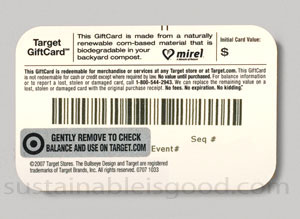 Sustainable is Good has obtained photos of the new gift cards as well as a photo of one of the cards after 40 days in compost.  The gift cards are only available at a small number of Target stores nationwide (129 stores).  Readers have told us the cards are sold in specially designed display cases usually located near the front of the store. The cards say the following on the back, “This GiftCard is made from naturally renewable corn-based material that is biodegradable in your backyard compost.

The cards are made from Mirel, a new family of biobased plastics made from corn that provides an alternative to traditional, petroleum-based plastics. Unlike conventional plastics, Mirel biodegrades in a variety of environments including soil, home compost, wetlands, rivers and oceans. 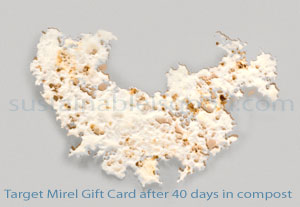 The biobased plastic is made by Telles, a company formed between Cambridge Massachusetts, Metabolix and Archer Daniels Midland (ADM).  Telles is a 50-50 joint venture between the two companies.

A new web site was just launched for Mirel plastics.

Telles is currently working with more than 50 prospects on more than 70 applications, including consumer products, packaging, single-use disposables, and products used in agriculture and erosion control.