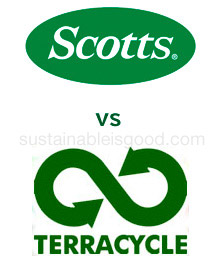 The Scotts Miracle-Gro Company and TerraCycle have reached a settlement in a lawsuit filed by Scotts.

Scott’s spokeswoman Su Lok contacted Sustainable is Good with the news of the settlement late Friday.  Interestingly there has been no communication on the settlement from TerraCycle who has been quite vocal and very actively engaged with the media throughout the suit.

According to Lok, “TerraCycle has agreed that it no longer will make advertising claims of product superiority to Miracle-Gro products to ensure accuracy in its advertising. More specifically, TerraCycle has agreed that it will not claim that its products are better than, or more effective than, or as good as Miracle-Gro products. In addition, TerraCycle may not claim that any independent tests or university studies were conducted to support any such claims.”

“TerraCycle has also agreed to change its packaging so it will not use a green and yellow color combination, for which Miracle-Gro owns a trademark registration. This change will be made to avoid any possible confusion with Miracle-Gro’s trade dress,” Said Lok.

Interestingly Lok also said, “The court order and the settlement agreement will be posted on TerraCycle’s www.suedbyscotts.com Web page. TerraCycle also agreed to phase out this site after three months.”

See our earlier coverage of the Scotts/TerraCycle lawsuit