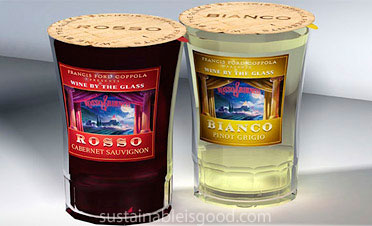 The Atlanta Journal Constitution reported in an interview with Coppola that he is already selling the wines in single serve packaging at “selected” locations including AT&T Park in San Francisco.

According to the Napa Valley Register the Francis Ford Coppola winery will offer its Rosso cabernet sauvignon and Bianco pinot grigio wines in plastic cups with peel-off foil lids.

Look for single serve wine in reusable bistro style plastic cups to be available nationwide in 2008.  “We’re having some production issues with the seal and the packaging. I’m not sure when we’re going to sell them around the country. Probably not until next year…,” Coppola told the AJC.

At AT&T Park home of the San Francisco Giants, the wines are quite popular outselling similar products with screw-cap tops and wines poured by the glass.  The new offering is designed to attract more consumers and appeals especially to the younger generation

The single-serve wines are known as “187s” referring to their size 187 milliliters or 6.3 ounces.

It is unknown what type of plastic the single serve wine cups are made out of and what the manufacturing process is blow or injection molding.  This is a key element in determining ease of recycling as many communities nationwide do not accept injection molded #1 or #2 plastics.

Of course the cups could be reused, however reuse is currently not a realistic option since they are sold in environments where disposable products are used (baseball stadium).  It is unknown if the Giants organization collects and recycles the wine cups