One of the most noticeable green packaging trends occurring in mainstream consumer products is in laundry detergents.  Nearly every major manufacturer of laundry detergent sold in the US market is coming out with a concentrated version of their most popular product packaged in a smaller lighter plastic container.

The major companies like Unilever, Proctor & Gamble and Dial are all using the new version of their laundry detergent to tout their greenness.

How did it all begin?  Concentrated laundry soaps are nothing new to the “green” marketplace, they’ve been around for years and are popular among devout green consumers.  A concentrated detergent for the mainstream market is another story.

When Method launched their laundry detergent they treated the launch more like an opening at an art gallery sending out a mailing showcasing their new small bottle and its benefits.  Like many Method products the packaging and design were far ahead of products in its class.  The bottle design was done by Karim Rashid and the graphic design was done by the team at Kate Spade.

After Method’s August 2004 launch of its concentrated laundry detergent it was just a matter of time before others followed.

Led by growing sustainability initiatives at the country’s largest retailer, Wal-Mart the major players in the laundry market all began developing concentrated versions of their detergents in smaller, lighter packaging.

Who would be first among the giants?  Unilever’s All brand launched the “Small & Mighty” bottle containing a 3x concentrated version of its popular All detergent.  The All Small & Mighty bottle is next to the Method bottle the most interesting and innovative of bottles developed so far.  The #2 HDPE bottle is produced by Graham Packaging along with its #5 PP cap.  Graphic design was done by UK-based Vibrandt Ltd.

The bottle was designed with input from Wal-Mart with the goal of making the detergent more shelf-friendly and more sustainable.  The detergent uses 64% less water in its formulation than their traditional All detergent and the bottle is lighter making it easier and more efficient to ship and also easier to use and handle for consumers.  Through a partnership between Unilever and Wal-Mart, Wal-Mart agreed to aggressively push All Small & Mighty in its stores.   The idea was to promote the product and eliminate any concerns from consumers.  The plan worked All Small & Mighty became popular and grew.

Unilever’s success with Small & Mighty and pressure from Wal-Mart led arch rival Proctor & Gamble to develop its own concentrated formula for its brands including Tide.  The Tide 2x Ultra formula and other P&G brands like Gain, Cheer, Era & Dreft have been tested in markets and are becoming available across the US and Canada now.  P&G is planning on replacing all existing SKUs with the 2X Ultra versions from 50oz – 200oz. P&G hopes to have them available nationwide & and Canada by the beginning of spring 2008.  It has been reported P&G is planning a full scale education & media blitz for its new packaging. 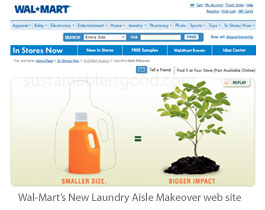 Wal-Mart’s national advertising circular for this week contains a full feature on the new Tide packaging and its benefits.

The Wal-Mart web site has a whole section dubbed “Laundry Aisle Makeover” devoted to laundry detergents including announcements that consumers can soon expect a concentrated version of both Purex and Arm & Hammer detergents.  Visitors to the web site can request a free sample of 2X concentrated Purex.

The question remains how will consumers react to the new packaging of their favorite laundry detergent?  It appears retailers are confident the new packaging will succeed and be an overall positive.  In order to produce the packaging the companies have had to spend considerable sums of money designing new bottles and retrofitting equipment for production.

Will the greener packaging trend in laundry detergent stop here?  It would appear not.  The Birmingham Business Journal reported Unilever will roll out a new “green” 2X concentrate of the All brand this fall in stores in Alabama.  The new product is different than its current 3X All concentrate available now across the country.  Unilever did not respond to repeated attempts from Sustainableisgood.com for comment on this latest version of All.