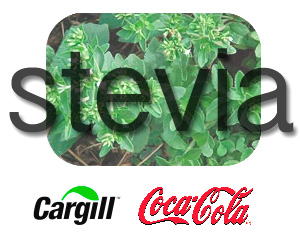 Coca-Cola filed 24 U.S. patent applications on May 24, 2007, covering the use of stevia in combination with a range of natural compounds (i.e., vitamins, minerals, glucosamine), in different delivery formats (i.e., condiments, beverages) and for several health conditions (i.e., weight management, inflammation).

The patent applications are the result of an ultra secret working group between $24 Billion soft drink giant Coca-Cola and food giant Cargill that began to filter out to the public earlier this month.  The working group was part of a joint effort by the companies to develop the “ultimate” sweetener, one they could even call “natural” unlike Splenda or Nutra-Sweet.

The result is a product derived from Stevia tentatively named rebiana.  In addition to the 24 U.S. patent applications, Coca-Cola will have exclusive worldwide rights to the sweetener for its beverage products.  Cargill will have rights to use the “natural” sweetener in its food products.

“This has been a closely held secret for a while,” Zanna McFerson, business director for Cargill Sweetness Solutions told the Minneapolis Star Tribune.  The Wall Street Journal reported the project began about five years ago when Cargill assigned 40 employees to scour the globe for the source of the “dream sweetener,” said Marcelo Montero, president of Cargill Sweetness Solutions.

The companies plan on launching products containing the new sweetener as early as next year in countries that allow Stevia for food use including China, Japan and Brazil.  Simultaneously under the terms of the partnership Cargill is handling product development and the regulatory approval process for the sweetener here in the U.S.

In March we reported on another sweetener, Splenda and strange marketing PR campaign by its two owners, Johnson & Johnson and Tate & Lyle to buy over two hundred negative Internet domain names related to Splenda.